When people hear that I review restaurants, often the first thing they ask is which is my favourite restaurant. That is actually a very difficult question to answer because it will depend on many things: The occasion, the person/people I’m with, my mood, the weather, what I feel like eating, etc. There is a place for many different types of restaurants on my list of favourites. Sometimes I recommend restaurants to other people even though I don’t like going there myself, because I know they will enjoy it even though it’s not my cup of tea. 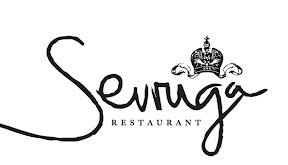 We sat outside to start as it was a lovely day and the heaters kept the vestiges of winter at bay. We had sushi to start, from a sushi menu which is identical to Beluga. This is no surprise as Sevruga is the sister restaurant of Beluga. I ordered my favourites which are salmon roses (R42) and prawn tempura california rolls (R60). Before the sushi arrived, they brough us each a complimentary taster of sticky tuna, which was tasty and a nice gesture. I would say the sushi was a bit better than Beluga and good value at 25% discount because we ordered before 7pm.

After the starter we moved to warmer pastures inside. The decor is fantastic, with no expense spared (except maybe the tables, but you’re not supposed to lift the tablecloths). It has a warm ambiance and the restaurant was full so it had that buzz which is always appealing. A very classy place. For mains I tried the fillet steak bated in olive oil and rock salt (R89 – 280g) which had been recommended to me. It did not disappoint. The best steak I’ve had since The Vault. My partner had defeated her appetite with the sushi so she ordered 2 side dishes of wok fried veggies (R14) and skinny fries (R14). I ordered the mediterranean veggies as a side for my steak. The veggies were fresh and I love skinny fries.

The wine list is extensive and not as expensive as one might expect. We enjoyed a Saxenburg blend at R120. But if you’re looking for an excuse to spend money, there were wines available for as much as R1500.

The service was very good, even though the restaurant is quite new. Other waiters or even managers walking past would clear plates and glasses rather than leave it for your ‘allocated’ server, which I like. It’s nice to be able to call on any of the servers and not worry whether it’s the correct one.

All in all, I was very impressed with Sevruga. I really enjoyed my meal and the experience. I will definitely be back.