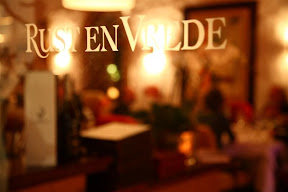 A while back I reviewed Rossouw’s Restaurant Guide, which I would say is the best restaurant guide available in SA at the moment. I was recently invited to the awards celebration for the three star restaurants in Rossouw’s guide. The nice thing about Rossouw’s rating system is that it compares apples with apples. With most restaurant ratings, the fine dining establishments take the top spots as is evident in the Pelegrino list. This does not happen with Rossouw’s guide as the restaurants are rated in their category.  At my table I had George Jardine of Jardine on the one side and Mariana of Mariana’s in Stanford, two very different, but excellent eateries.

The event was held at Rust en Vrede. I’ve been hearing rave reviews about Rust en Vrede since they opened the new restaurant with David Higgs as chef, but haven’t had a chance to try it out, so this was a welcome opportunity to check it out. 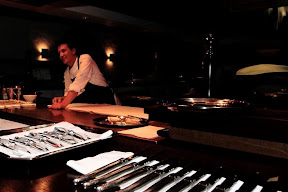 We mingled for a short time while enjoying the Billecart-Salmon champagne on offer (I’ve never had it before, which is unfortunate because it is definitely the best champagne I have ever had). Then we were seated and given a glass of our first wine for the evening, the Beaumont Hope Marguerite 2008, a wooded Chenin. I’m not generally a fan of wooded whites, but I suspect I’ve been drinking the wrong ones. This wine was was sublime, I finished my glass while the awards were being handed out and gladly accepted the refill when the food came.

The proceedings started with a presentation about Streetsmart, a charity which helps street children using donations from restaurant diners. I will do a separate post about it because it deserves attention. JP Rossouw then gave a short speech and presented the restaurants with their awards. The 13 winners were: 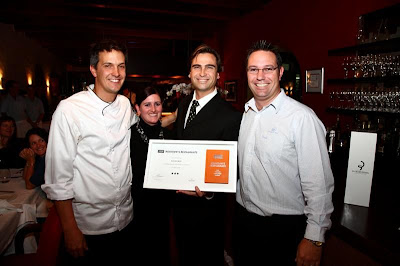 Then the first course arrived, cold smoked salmon trout, crispy quail eggs dusted with Volcanic Salt and salad. As the food arrived I thought to myself that it was very brave of David Higgs to volunteer to cook for the top chefs in the country, no pressure! But as I began to sample the first course, I knew we were all in for a treat. I’m not going to go into great detail about the food, but rest assured that each course was so good that it was difficult to decide which was the best.

As anybody who has experienced a decent pairing will know, correctly paired wines take a meal to the next level. The pairings for this meal could not be faulted. It was handshakes all round in my mouth as the wine met the lingering flavours of the food and vice versa.

The second course was risotto of tiger prawn and a mild cape malay curry with a mango and cashew salsa. For some this was their favourite, it was certainly magnificent. Pairing it with another wooded chenin, the Ken Forrester FMC made for a flavour combination my tastebuds will remember fondly for years to come.

The third course was cutlet of pan-fried Karoo lamb, balsamic braised shank, with shallots, peas and beans and paired with the Rust en Vrede shiraz. The full bodied shiraz was a perfect partner for the flavourful and tender meat. The last course was lemon meringue and cardamom ice cream paired with Paul Cluver Noble Late Harvest. A fine end to a fine meal. 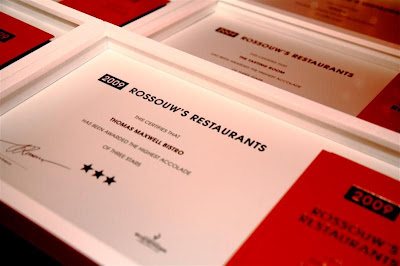 I cannot close my comments on the evening without mentioning the restaurant itself. Rust en Vrede restaurant is a beautiful and impressive space. An elegant combination of the oldness of the original cellar and tasteful modern decor, creates a venue in which it is a pleasure to spend time. The open kitchen, as it usually does, adds to the atmosphere. The service was impeccable, even I couldn’t find anything to complain about. My only complaint about the whole evening (just so you know I did have my usual critical eye) was that the bottled water was imported.

I will most certainly be returning to Rust en Vrede in the future and I feel sorry for the next few restaurants I review because they will struggle to compare. If you are serious about eating out, get yourself a copy of Rossouw’s Restaurant Guide as it will help you spend your time and money wisely.