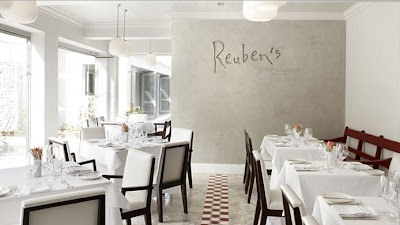 We ate at Reuben’s at The Robertson Small Hotel on the last night of our time in Robertson for the Slow festival. Before I write about my experience of the restaurant, I must just tell you that the Robertson Small Hotel is awesome. We were given a short tour of the hotel and of some of the rooms, the hotel looks great and the rooms were beautiful. I’ll definitely be trying to organise to stay there a few nights soon.

Below is a picture so you can get an idea of what I am saying. You can find more in the gallery on their website www.therobertsonsmallhotel.com

Now back to the restaurant. The decor is an extension of the hotel decor, which means it’s very good looking. The white theme is broken by subtle colour intrusions, the red of the tile detail on the floor, the dark brown of the wood of the chair insets and the vibrant colours of the flower decorations on the tables. It’s a very clean and striking style. I am seldom impressed by tableware, but found myself paying attention to the Italian cutlery for some reason.

We were seated near the kitchen, which is open so I had a good view of Aviv Liebenberg in action in the kitchen. Aviv is the executive chef, Reuben is the concept chef and still spends 99% of his time at his Franschhoek restaurant. We were well looked after service wise, but unfortunately our waiter, although competent, was softly spoken. He was drowned out by the sounds from the open kitchen, which was so frustrating that I gave up and often didn’t really know what the waiter thought I wanted from him. Despite that, he got the order right and with a few interventions our other requests were fulfilled.

To start we had the onion tartlet (R48) and the chilli salt squid (R62), both apparently Reuben signature dishes. I enjoyed the squid and my partner loved the tartlet which was a bit rich for me. Both starters were generous portions.

For mains I had the beef ribeye steak (R145), cut unusually so that it looked like a fillet steak. Despite the thickness, it was done perfectly to my specification, something I seldom experience these days. My partner had the tandoori roasted kingklip (R102) which enjoyed excellent flavours, but I am still not a fan of kingklip and am starting to become very tired of seeing it on every menu, especially as it is on the orange list.

To my left was the window into the wine room which looked very appealing, the wines neatly presented and well lit. We selected a Reyneke organic blend at R175 from the list which offered some good choice and a range of prices. The Reyneke was a mid range option price wise.

We tried to resist dessert but settled for sharing the pain perdu (R52) which is basically a bread & butter pudding. But this is served as a slice and is made from croissant pastry plus has fresh banana in it. It was yum!

A quick chat with Aviv revealed that one of the challenges out in Robertson is getting suppliers to deliver, and local suppliers to accept payment terms. They do try and support local suppliers as much as possible and go so far as to mention on the menu who their suppliers are. This I think is a nice touch and a good move in the direction of food provenance. Consumers must become more concerned about where their food comes from.

As I mentioned, I hope to stay at the hotel sometime soon and will be definitely eat at the restaurant again while I am there. 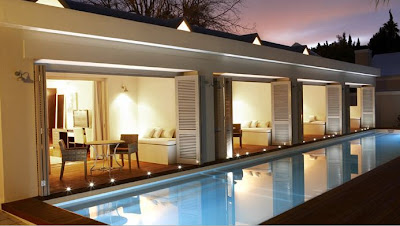