When the One & Only was built recently I didn’t really pay much attention. After all, what use is a 6 star hotel to a poor local? (Yes I know there is no such thing as 6 star, but believe me, if there was…) Little did I know that I would be spending a lot of time there for a variety of reasons and enjoying every visit tremendously. Even if you don’t stay at the One & Only, there are plenty of reasons to visit it. One of my favourite reasons to visit is the bar. Vista Bar is what you see first as you walk into the hotel foyer. Positioned in front of an expansive glass wall with a view of Table Mountain which hints at how the bar got its name. There are several reasons why I find Vista Bar appealing:

– There is valet parking so you get out at the door and don’t have to pay for parking. Even tipping the valet is cheaper than Waterfront parking and you save ten minutes walking from and to the parking.
– The drinks are not expensive. You can get standard cocktails (eg. Mojito) for R40. There aren’t many decent bars in Cape Town that charge that or less.
– The cocktails are great. Not only are the standard cocktails executed well by the obviously well trained barmen, but they have a selection of interesting cocktails which are unique to the Vista bar.
– The bar is open late. I like to go to Vista Bar after dinner for a night cap and I like the fact that it’s not crowded and smoky.
– They have decent music playing. The One & Only hires Cape Town’s top DJs to lay down some uplifting beats most nights of the week until late.

Why else do I visit the One & Only? Well, I’ve eaten at Nobu several times and one of those occasions provided one of the best meals I’ve ever had in South Africa. I ate at Maze several times too, before it closed down. I’ve also attended several functions at the One & Only, including the American Express Platinum Fine Dining Awards, the ‘Island Parties’ which happened during summer and more. One occasion I was given a tour of the rooms and was really impressed. So you can imagine there was no hesitation in accepting the offer of a weekend at the hotel with a spa treatment thrown in.

I want to live at the One & Only. My two nights there were incredible and I was very sad to leave. Months later I still go and eat there or have a drink at the bar pretending to myself that I still stay there (I also pretend to the waiter when the bill comes). Staying at the One & Only is a very relaxing experience. From check in to check out, you never have to give a second thought to anything (except maybe how you’re going to pay for it). I might go into some detail in this review, because I think the detail is what makes the One & Only the experience it is. In stark contrast to my stressful arrival at 15 on Orange recently, arriving at the One & Only is a very pleasant experience. As you pull up to the front door, a valet opens your door and hands you a retrieval ticket while a porter waits to assist you with your luggage should you be checking in. Stepping inside, you are allowed a few seconds to digest the impressive foyer before being directed to one of several check-in desks. There is no reception counter, just several desks where you can take a seat and check in comfortably. After being handed your security card, you are escorted to your room by the porter and a butler.

Each room has a butler that assists you with any requirements you may have. The butler quickly explains the less obvious elements of the suite (eg. How to operate the TV and which button on the phone to push to call the butler), and on the way out offers to have your shoes polished and your dress/shirt ironed for the evening. If you’re feeling a bit overwhelmed, you may not be ready to peruse the pillow menu, but when you are you can select which type/types of pillow you would like. There are about five options, including special support pillows and hypo allergenic pillows. If you’re in the mood for looking at menus, then you can also peruse the bath menu. On request, your butler will draw a bath for you and include your selection of oils and/or salts. We had an appointment at the spa, but decided there was enough time to investigate the room a little. Each room has a balcony with chairs and a table, all the more appealing because every room overlooks the island and has views of Table Mountain (apart from the rooms on the Island which are even bigger and are right next to the water). Heading back inside we spent a couple of minutes trying to figure out how to use the espresso machine (it’s quite simple once it’s plugged in). Then we modelled the summer and winter gowns and slippers before realising we were now late for our spa appointment.

The One & Only Spa is pretty impressive. We were ushered into our respective changing rooms where we traded our clothes for a gown and slippers. Then we were escorted to our treatment room (one of twelve, I believe). My partner said it was one of the best massages she has ever had (she has them often), but I’m a bit of a wimp so I spent a lot of the time being thankful that I asked for medium and not hard. After the massage we spent some time frolicking in the vitality pool and sauna in our respective changing rooms.

Back to the room and we relaxed a bit before heading down to dinner at Maze. Maze has subsequently closed and been replaced by Reuben’s. It still has the biggest wine collection in the Southern Hemisphere (or something like that) though. On the second night we ate at Nobu and that was amazing fabulous. Read that review here. Breakfasts were done by Maze, so one morning we ate in the restaurant and the other morning we ordered room service. I quite enjoyed breakfast in the room. 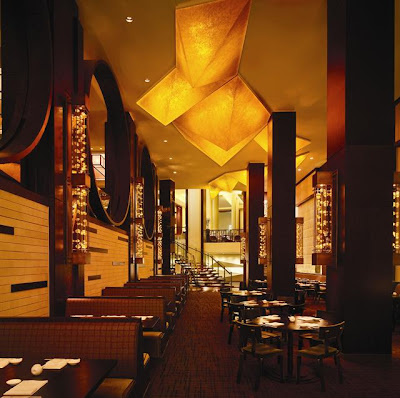 On the second day I had a tour of the hotel facilities. The conferencing/function facilities are quite substantial and the business centre has all you need. The hotel has free wifi and each room has a desk and chair so working on a laptop is no problem. Two things really impressed me about the One & Only, the kids entertainment facility and the gym. Many hotels think that offering interleading rooms makes them family friendly, but none of them offer the kids facilities that the One & Only offers. They can entertain kids of all ages for the entire day and then provide a babysitter in your room in the evening. The kids zone is divided into areas for each age group with relevant crafts, games, etc for each age group. They even do outings. As for the gym, it was really impressive. Normally hotel gyms are tiny rooms with a treadmill or two but the One & Only gym is huge with a huge array of the latest equipment and personal trainers to assist guests with their workouts.

In summary, there’s a very good reason the One & Only markets itself as a six star hotel. There is just no comparison between the One & Only and the many other five star hotels. Everything is taken to another level, whether it be service or facilities. Whether it’s worth R7000 per night, or thereabouts, I’d say no because I don’t think anything ever could be. But they are often running specials and that could make it worthwhile, especially if it’s a special occasion. You really will leave feeling pampered and be prepared for the shock after you’ve left and you realise you’re not the most important person in the world.