It was interesting attending two very different beer festivals on the same weekend. I attended the craft beer festival on the Friday night (read my review here) and Oktober Bierfest on the Sunday afternoon.

Many people think this is the SAB Oktober fest but actually SAB is just a sponsor. They made the village green at the Newlands brewery available as a location, and they brewed three speciality beers for the bier fest, but the event was organised by an independent company.

It’s an annual event, but this is the first year. According to the organisers, this year it’s in Cape Town and Johannesburg (27 – 30 Oct) but will expand to other cities in the years to come.

One thing that is immediately noticeable about this festival is that they did not cut any corners. Everything was done to a high standard. The massive marquee had a facade that made it look like an old school German beer hall. It’s quite interesting how something small like that can give you a positive first impression which affects your attitude toward everything else. 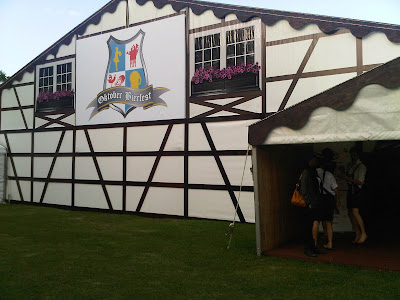 The was plenty of space so it wasn’t too crowded. There were more than enough tables and benches so it was easy to find a seat. There were numerous Fraulein serving the beer and food so service wasn’t an issue. The beers were speciality beers brewed for the festival, so it was interesting trying each of them. The price was R40 for a litre, pretty good value.

The food was handled by Raith Gourmet, and as you can imagine the quality was good. The selection was not extensive but good for a beer festival. German sausages, crumbed chicken pieces, various German style salads, etc. I tried a few of the options and it was all very tasty. 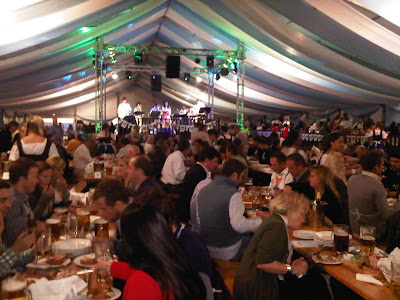 There were plenty of toilets, I never had to queue long for one. There was an outside section as well, supposedly for smokers but we actually spent most of the afternoon out there enjoying the sunshine.

SAB had a stand which was manned by the brewers themselves so one could go and have tasters of the various beers and learn how they were made. The three speciality beers were Munich Dunkel, Krystal Weiss and Oktoberfest Bier. Each of them were very different but all of them enjoyable. For the non beer drinkers, there was a selection of wines available too. 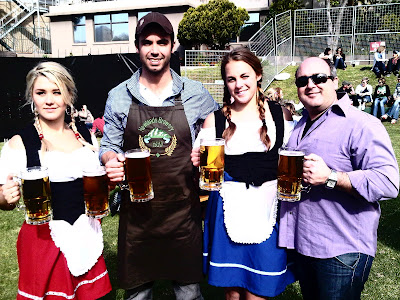 We had a fun time at the bierfest. We enjoyed a few rounds of beer outside in the sunshine, then when it got a bit chilly we went inside and grabbed a table near the action. We chatted and danced and drank more beer. We had some snacks and watched the bands and drank more beer. Then we went home (I called Goodfellas, in case you were wondering).

I think think festival will grow each year and they have grand plans for expansion. Perhaps it will attract people from all over like the real thing in Munich, and become a tourist attraction. We really should make more of the heritage of Newlands Brewery, after all, it is nearly 200 years old. I think this festival is a good start.

ps. Sorry about the poor quality of the pics, I didn’t have my camera so had to use my phone.