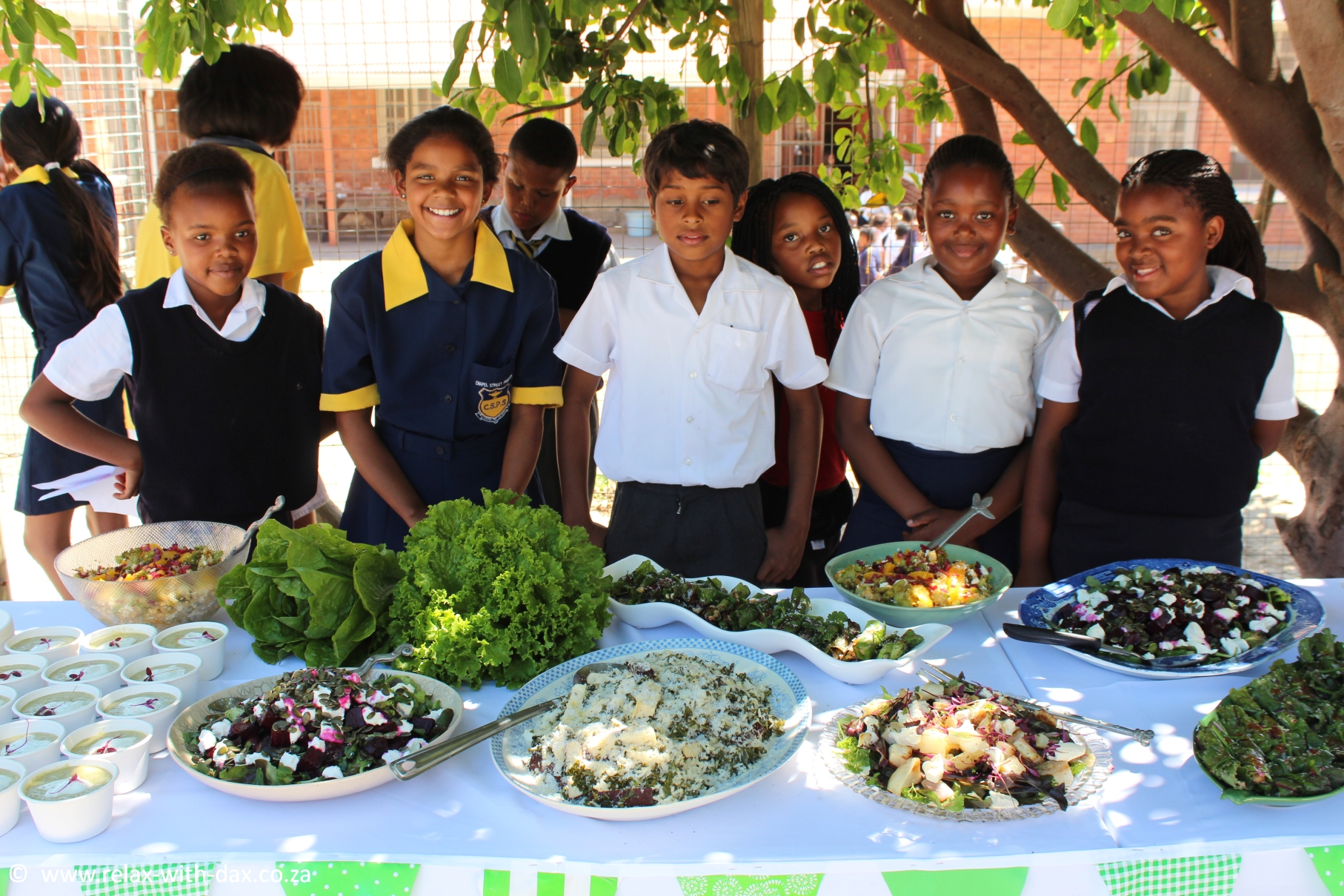 Follow through and follow up. Those two very important concepts form the theme of this report on my most recent visit to Chapel Street Primary School in District 6 for the Harvest Table lunch. MySchool originally invited me to Chapel Street Primary to assist the team from Woolworths Financial Services (WFS) with planting an edible garden for the school. Read more about that here.

That was 3 months ago, and during that visit I learnt that the relationship between WFS, MySchool and Chapel Street Primary was a long standing relationship. Employees of WFS had been volunteering their time and expertise at the school for a few years, mentoring staff and rendering assistance wherever it was needed.

This was no 67 minutes, no knock and drop. This was the way it should be done; Extended, sustained assistance that has a long term impact. Cooperation between organisations has much to do with it. Apart from MySchool and WFS, also involved in this project were Partners For Possibility and Urban Harvest. Each party brings something to the table and the cooperation extends the network. Which is how See Saw Do got involved.

I was invited for a second visit to help the MySchool staff paint a mural at the school under the guidance of the team from See Saw Do who specialise in improving environments of children, which has significant impact on the children. We spent a Saturday painting the mural, which the learners only saw when they arrived at school on the Monday.

My 3rd and most recent visit was for the harvest table lunch, the follow up on the edible garden. It’s hard to believe that this garden which I helped plant just 3 months ago was now ready to harvest. And not a small harvest of little veggies either. Betroot, spinach, lettuce, broccoli, kale and the biggest turnips I have ever seen in my life, were just some of the harvest.

Celebrity chef Sue-Ann Allen of Masterchef SA fame was tasked with transforming the harvest into a selection of dishes for the harvest table. With the addition of just a few ingredients such as tofu, nuts, rice and coconut, Sue-Ann created an incredible selection of dishes which were both visually appealing and delicious. She was assisted in the kitchen by the school kitchen staff and leaners from the school who are members of the ‘garden club’.

Members of the garden club get to work in the garden a few times a week. They were witness to the growth of the vegetables from seedling stage. Those same hands that tended the garden now helped to turn the harvested vegetables into glorious plates of food. It was evident that they were in awe of the spread before them and their delight was unmistakable when they finally got to serve and eat a plateful of food that they had helped to grow.

In a world of polony, genetically modified maize and Gatsby’s, to teach a child how to grow vegetables and turn them into a nutritious meal is a true education. It’s the terrestrial version of teaching someone to fish instead of just giving them a fish. There are so many life-lessons involved in this process. Some of the kids have already asked for seeds to take home so that they can start growing vegetables at home.

What we have here is not just some corporate social responsibility, not just a food garden at a school, but the seeds of change.

See my gallery of photos from the edible garden harvest lunch here.