There is no doubt that the L’Ormarins Queen’s Plate is gaining more and more traction every year. I attended it for the first time in 2010 (review here) and wasn’t able to attend last year as I was out of town. There was a huge difference this year. In 2010, most people didn’t know what I was talking about when I said I was going to the Queen’s Plate, this year most of those people were also there! And those who weren’t, wished they were.

Many people have become a bit tired of the bun fight that is the J&B Metropolitan and are choosing the more sophisticated Queen’s Plate instead. With it’s strict dress code and traditional theme of blue and white, The Queen’s Plate brings to life how we always imagine a day at the races to be.

The trendiest venues like Caprice and The Reserve have chosen to have tents at the Queen’s Plate rather than the Met, which is an indication that this is the event to attend.

As a racing event, it’s taken very seriously. This year was the 151st running of the Queen’s Plate, making it the oldest race on the South African racing calendar. With prize money of a million Rand, it’s no lightweight. 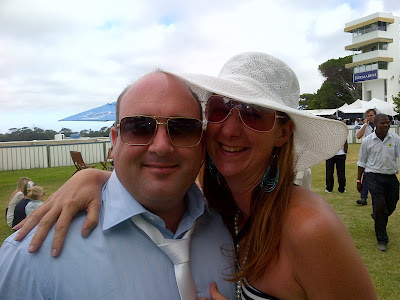 In terms of parties, when the racing is done, the music starts pumping, the ties come off and the bars get extra busy. The bands that performed this year were Tumi & the Volume (these guys are great, I bought their CD after hearing them at Symphonic Rocks) and the Kongos (click the link and listen to Come With Me Now, then you’ll know who they are), as well as Spoek Mathambo who I do not know.

I was fortunate to be invited to the VIP Stud Club, which meant I had a place to rest my weary legs and there was complimentary food and drinks all day. The VIP Stud Club was full of the who’s who, so I spent some time networking and having a few drinks. Then I decided to take a look around so I took a walk to the main stands and spent some time chatting to friends there.

Then I made my way back to the Stud Club to get another drink, check out the announcement for best dressed couple (I didn’t win) and also catch the last couple of races. We had a tote in the tent but I didn’t do any gambling. 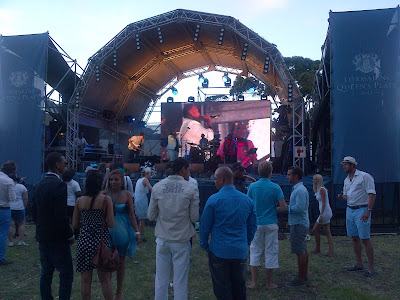 After the last race we checked out some of the other tents before wandering over to the main stage to watch the bands. By the time Goodfellas arrived to take me home I was exhausted and it was only 10pm. Apparently the party carried on much longer but I was happily in bed by then.

The Queen’s Plate is a great day out. If you missed it, shame. Make sure it’s in your diary for next year.