Anandale Road in Stellenbosch provides access to many highly acclaimed wine estates which together form the ‘Golden Triangle‘. I have been to many of them, and you will recognise names such as Bilton, Alto, Ernie Els, Guardian Peak, Hidden Valley and Rust en Vrede. That last estate, well known for it’s multi award winning restaurant, is right next door to Haskell Vineyards.

Haskell invited me to attend the launch of the new vintages of several of the wines in their Dombeya range. Haskell used to be called Dombeya before it was sold, now the estate produces a Dombeya range and a Haskell range of wines. Haskell was one of the few estates in the area I had never visited before, so I was pleased to have this opportunity.

But it wasn’t just the opportunity to have a look around that had me excited, I was genuinely keen to try the wines as I had met the winemaker, Riani Strydom, at the Cape Winemakers Guild tasting last year, and tasted the Haskell wines, which were fabulous. So I knew the Dombeya wines would be good.

On top of that, I had heard so much about the restaurant that had opened on the estate a few months before, the Long Table. I was going to be treated to a lunch there after the tasting.

We were welcomed with a glass of the sparkling shiraz which they were launching then as well. I’m not really a fan of sparkling shiraz and after a couple of sips I realised it was not to my taste. We then moved down into the private tasting room in the cellar.

There we were presented with the new wines, two whites and three reds. The sauvignon blanc 2011 (R60) & chardonnay 2010 (R95). I liked them both, especially the chardonnay and I’m not a big fan of wooded chardonnay in general.

I’m more of a red wine drinker and these red wines were just my style, big and full. I was really impressed with the merlot (R85) as I’ve seldom find a merlot that is so full and complex. The cabernet (R85) was my favourite of the five wines, a really serious wine but nicely balanced and the tannins are soft despite its youth. The shiraz (R96) was also great, leaning towards more Rhone style and with 5% mourvedre adding some additional complexity.

All the wines are really excellent value at those prices. I will certainly be keeping an eye out for them next time I’m wine shopping.

After the tasting we went for a little walk to see the new self catering accommodation which had recently been completed. Well, the ‘Farm House’ which sleeps four was complete and the cottage which sleeps two will be ready in a couple of months. It’s beautifully appointed and has a stunning view. It also has a sizeable garden which will be great for kids, and a fireplace for cosy winter weekend getaways. The layout of the house is a little unusual, with odd things like a massive walk in cupboard and the fact that you have to walk through one bedroom to get to the other. But I think it’s actually an awesome spot for a weekend away. I will review separately, as soon as I have a weekend free to go and try it out. 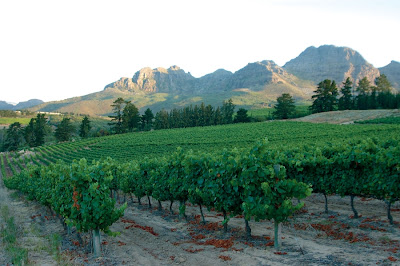 Next on the agenda was lunch at the Long Table. It was a stunning day (in the middle of winter!) and we sat out side (at a long table) with the amazing view in front of us (I was on the right side of the table, obviously 50% of the people didn’t have that view). I have had a quick look at the menu on the website and unless it’s out of date, the dishes we ate are not on it. So I’m going to have to go back and review it properly but I’ll tell you about the food anyway. It was a set menu, starting with prawn risotto, topped with prawn bisque sauce and a poached prawn, which was excellent. But I saw the vegetarians having a spicy creamy tomato soup which looked so good I made them bring me a taster and it was amazing. There is actually a recipe for tomato soup on the restaurant webpage and I think that’s the one, I must try make it.

For mains we had stuffed guinea fowl which was pretty good, but it was served with cassoulet beans which were delicious. Dessert was a Belgium white chocolate and orange cheesecake, which sounded better than it tasted, but I’m not the biggest fan of orange in dessert anyway.

While I was looking at the menu online, I noticed a breakfast which I must have soon, two eggs poached in sauce of onion, tomato, garlic, peppers, bacon and hint of chilli and north african spices, served in pan. Doesn’t that sound amazing? When I spend the weekend there, I’m having that breakfast.

It was actually such a lovely day that we sat and chatted and drank wine until about 6pm. You will also be tempted to do that, but I recommend you leave at 5pm, because that’s when they close.