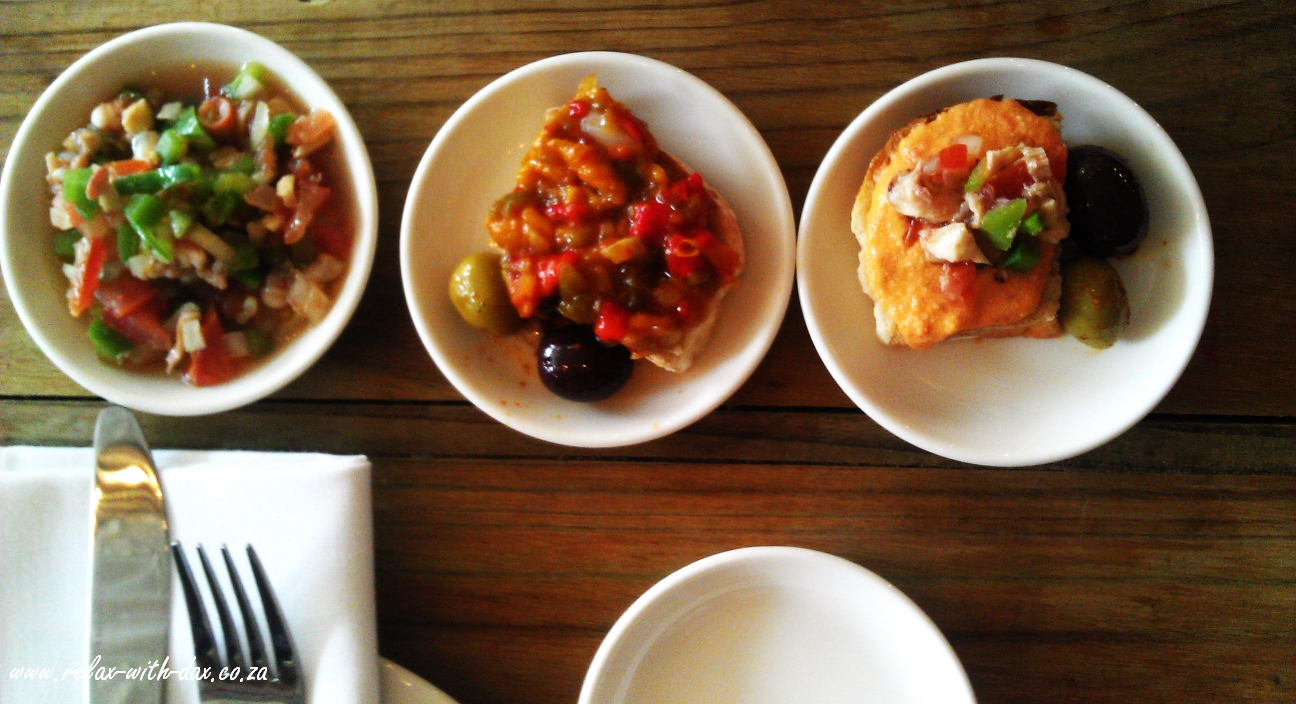 Some of you may not know that I am half Spanish. I have visited Spain many times and enjoyed Spanish cuisine, both in Spain and at home. I always found it surprising that we had no authentic Spanish tapas bars in Cape Town, because the food is really tasty. I even looked into doing a tapas bar myself. A good friend and I spent many nights developing a business plan for this amazing tapas bar, until we realised that with no restaurant experience between us, the restaurant would very likely fail. It was going to be called ¡Venga!, which means Come! We were sad to shelve the idea, but we were worried that nobody would come.

La Parada is part of the Harbour House group. The first La Parada opened in Kalk Bay at the beginning of this year. It was one of the first tapas bars in Cape Town to try and recreate the authentic Spanish tapas experience. There are many restaurants in Cape Town that serve tapas, but they are simply small portions of food and not representative of Spanish tapas. If I remember correctly, there used to be a dodgy tapas spot on Long Street called Diablo, but that was so long ago even Google has forgotten. Then the owner of Kyoto Sushi Garden, Scott, also opened up a small Spanish tapas bar on Long Street. It was opposite the Dubliner and was called Ultima Tapa. It was a lovely little spot, but the tapas were pricey and it didn’t last long.

I haven’t managed to get to La Parada in Kalk Bay yet. The feedback I received from Spanish friends was that the tapas were average and the feedback I got from everyone that the menu is quite short, and whenever you go some dishes will not be available. Despite the lackluster feedback, I was very keen to check it out for myself. So I was pleasantly surprised to learn they were bringing La Parada to me. To Bree Street to be more precise. You’ll find the restaurant over the road from Heritage Square, in the new development where the garage used to be. I’ve managed to visit several times already. I’ve eaten there 3 times to be exact, one was the launch function.

I have to say, the place looks fantastic. Despite being a brand new building, they have managed to infuse a feeling of age into the place. Reused tiles and parquet give the floor a travel worn look. Mismatched chairs and rough/unplastered sections of the wall add to the look. The restaurant is situated on the corner of Bree & Shortmarket Streets, and one of the things I like is that on the Bree Street side the windows open up and you can sit on both sides of the counter, either on the outside facing in or the inside facing out. I love it when restaurants spill onto the street like that. They do have a security guy to ensure you don’t get harassed by every passer by.

The opposite side of the restaurant is where the bar and open kitchen are. Not everything happens in the open kitchen, there is also a closed kitchen. The last wall is plastered with Spanish posters and a mural, both of which look great and really add to the feel of the place. It’s a big restaurant, I estimate it seats about 110 people. When it’s full it’s actually quite rowdy, more the festive dinner vibe than the romantic dinner vibe. It’s going to be spectacular for drinks in summer.

Seeing as we’re talking about drinks, I must tell you about the cocktail menu. Firstly you need to know that their pouring tequila is Olmeca Altos (read my thoughts on it), so the margarita’s (R45) are excellent. But they have also brought in some mixologists to develop some interesting new twists on classic cocktails. For instance, consider the El Negro Burro (R45 – should be El Burro Negro, but never mind), based on the classic mule: Tequila, pressed apple juice, homemade cinnamon syrup and gingerbeer. Doesn’t that sound good? If you like some spice, you will probably enjoy the caipirinha picante (R35), a caipirinha with chorizo infused cachaca.

In addition to the selection of tasty cocktails, there are several craft beers on tap at great prices (R30 to R35 a pint). And of course there is a wine list. Containing 10 whites and 8 reds, it’s not a particularly inspired wine list. Prices range from R99 to R250 for the whites, R112 to R210 for the reds. In terms of value, my choice of white would probably be the Paradyskloof chardonnay at R99, and red would be the Naughton’s Flight shiraz at R131.

I was told that there is a blackboard offering some Spanish wines, but I did not ever see it. There are however, some Spanish sherries on the menu at R28 to R45 a glass.

The menu items are definitely Spanish, although possibly restricted by the unavailability of certain ingredients. The only other thing I think would make the menu more authentic would be more pork based items like chorizo, and albondigas (meatballs). I like that you get a small tapa with a drink, and I like the way they have structured the dish prices. You can order a small portion for one person (R15 to R28) or a bigger portion of the same which is good for 2 or 3 people (R36 – R50). Depending on what you order, 3 portions of tapas should be enough per person.

In terms of the quality of food, it depends on what you order and when you happen to be there. For instance, the tortilla (not Mexican style, this is more like a potato fritata) has good flavour but sometimes it’s too dry. Some of the dishes are really not great at all. The ones I liked and recommend are: (I’m giving you the English names, which are on the menu) Octopus salad, Spanish omelette, calamari, spicy steak, ham croquettes, chickpeas & chorizo (this is my favourite dish) of all. The patatas bravas are ok too.

There are 4 main dish options too, like linefish (R95) and a lamb dish (R85) which is apparently very good. There are 3 desserts, but I have not tried any of them. Which leads me onto a big problem with La Parada, the unavailability of dishes. The regular complaint about La Parada in Kalk Bay was that many of the menu items were unavailable on any given day, and I am hearing the same complaint about Bree St. Each occasion I have visited, there have been several items unavailable. Not 1 or 2, more like 5 or 6.

If you’re not going to have items available every day for whatever reason, then don’t have a fixed menu. Have blackboards which show only what is available at the time. There is nothing more frustrating than selecting some dishes, only to be told half of them are not available. I’m also surprised that they don’t tell you what is not available when they give you the menu, but wait until you are ordering to break the news. Are they hoping you won’t order the things that are unavailable?

And talking about the waiters, I should comment on the service but I think it is early days. There will be some hiccups as the new staff get used to the processes, etc. Overall the service I experienced was good, with a few things here and there that need improvement.

Overall I think La Parada is a great spot and it’s going to be very popular over summer. If they sort out the issue of dishes not being available, and you avoid the dishes that are not so great (see advice above for which dishes I recommend), you will have a fabulous experience. Do bear in mind the place will probably be quite festive, especially on weekends, so it’s not ideal for a romantic date.

More photos of La Parada and the food here.