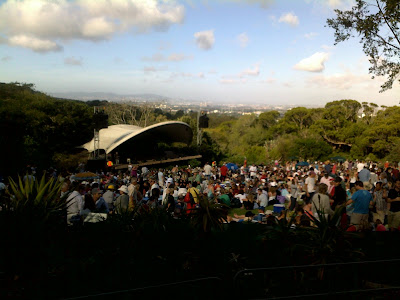 Here’s the line up for this summer of Kirstenbosch concerts. Some really great ones there. The prices seem to have standardised at R100 except for Parlotones at R125 and a couple that are below R100. Carols by Candelight are R60 and the new year’s eve party with Prime Circle is R250. Details about how you can obtain tickets can be found below the list.

At the Venue
– Tickets go on sale on the Tuesday preceding each concert, from the Visitors’ Centre Ticket Office only.
– On the Sunday of the event, concert tickets can be purchased at all entrances, and includes entrance to the garden if arriving early (keep your ticket to gain entrance to the concert area later).
– Concert tickets are limited, but garden entry tickets will still be available if the concert venue is sold out (visitors can picnic on the lawns outside the cordoned-off concert area).
– Kirstenbosch is open from 08h00 to 19h00 (Sep – Mar), 08h00 to 18h00 (Apr – Aug).

Telephone Bookings
– Telephone: 021 761 2866 / 799 8782.
– Telephonic bookings may also be made from the Tuesday before each concert. An administration fee of R10 per ticket is applicable for telephonic bookings.
– Your tickets will be available for collection from the Visitors Centre.

Online Bookings
– Online bookings can be made at Webtickets.
– When you buy an e-ticket on-line your ticket will be delivered directly to your computer. Not only will you get your tickets right away, but you can print them out anytime before the event.
– Each e-ticket has a unique bar-code on the top right of each ticket. This is used to identify the ticket and ensure only valid tickets are granted access into the event. It is important that the bar-code has been clearly printed on the ticket as this will prevent any delays when entering the event. Print your ticket(s) and bring to the event where the ticket(s) will be scanned.
– Redeem your e-ticket(s) at the Kirstenbosch Ticket Office from the Tuesday before, or on the concert day.