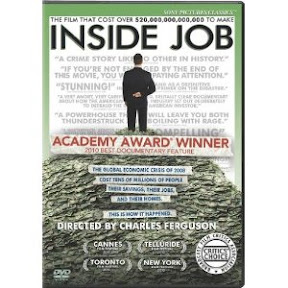 When people around me complain about the corruption of our government in South Africa, my response is always the same. I’d rather have our corrupt government than anyone else’s. The citizens of the United States of America and to a slightly lesser extent Europe, are being milked dry and don’t even know it. At least we know what’s going on and it’s a lot more small scale than anywhere else. Even our ridiculous arms deal scandal isn’t a blip on the radar compared to international scandals.

Most people don’t seem to understand what I’m saying. Those people in particular, should watch Inside Job. This Oscar winning documentary takes a look at the financial crisis of 2008. It looks at what happened, how it happened, what was done about it and what the future holds.

It is a scary documentary and it’s likely that viewers will leave with two emotions: anger and frustration. Maybe a little disbelief thrown in there. I’ve been labelled a cynic by people who know me well, and I realise why. It’s because I watch these documentaries and read these sorts of books. I see human nature in all its evil.

I’ve read many articles on the financial crisis. I even posted about it myself, with links to articles explaining what happened. But they explain how it happened so well in this documentary that I definitely have a clearer understanding now. Which means I also have a clearer understanding of exactly how greedy all the people working in the financial sector were (and are, I’ll explain later).

It was interesting to see how the bankers refused to accept responsibility for what they had done, even when it was demonstrated so clearly that they had deliberately set out to defraud their investors. Even the ratings agencies (Moody’s, Standard & Poors, Fitch) said that their ratings were just guidlines and should never be used to make investment decisions. Um, excuse me? Why would we need ratings agencies then? This is particularly interesting because pension funds by law have to invest in AAA rated financial vehicles. So the banks needed the rating agencies to rate their dodgy financial instruments as AAA in order to get pension funds to buy them. The rating agencies did that. Why? Because they are paid by the banks!

What is really annoying is that none of the bankers involved in this trillion dollar fraud have been charged with any crime. They decimated the global economy, cost millions of people around the world their jobs and homes, pushing millions (15 if I remember correctly) below the povery line, but they were not punished in any way. In fact, they got to keep all their multi million dollar bonuses. One guy earned half a billion dollars in 2 years! HALF A BILLION DOLLARS!! ONE PERSON!!

And here is the kicker; Since the crisis, the USA has not put in any regulation or controls. Europe had implemented some regulation around banker’s bonuses, the USA has not done that either. In fact, last year the two biggest banks paid out about $30 billion in bonuses. Excuse me? Do you see what I mean about our arms deal looking small? These okes are doing it properly.

Boy, am I glad I live in South Africa. Do yourself a favour, go watch this documentary. Seriously.