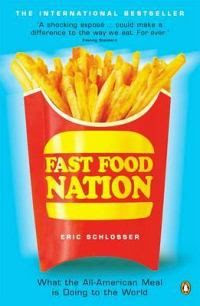 Fast Food Nation by Eric Schlosser is a great book. I know it is now a documentary, but I find the book has a lot more information than a documentary generally does. I wouldn’t mind watching the documentary as well, actually. My expectation of the book was very different from the reality, but I much preferred the reality (not that I wouldn’t have enjoyed having my expectations met, otherwise I wouldn’t have bought the book, obviously). I expected the book to focus on the usual anti-fast food themes, ie. damage to the environment, promoting unhealthy food, exploiting workers, etc. While the book does cover some of the usual issues, it spends more time addressing other issues and does a very good job of it.

We would never imagine the effect that fast food has on society in a myriad of ways. Would one suspect that hamburgers are the reason that poor farmers are being forcibly evicted from their land in Paraguay? The reason is that they want the land to grow genetically modified soy to feed the cows to make the burgers. It takes 7 tons of grain to produce 1 ton of meat. The depletion of the rainforest in many South American countries is also to grow GM soy. I am starting to get sidetracked here, so back to the book.

Notice how I started to get all emotive in the previous paragraph? Well, the book doesn’t do that. It’s a must read, it’s well researched and well written. I believe it’s important for us to realise that our lifestyles are not sustainable.

I was quite impressed to see how cheap the book is from Kalahari.net. Click here to check it out.