While You Were Sleeping has organised a screening of Escape from Suburbia at the Labia. I went to watch the documentary last night. Often one can watch these documentaries online or obtain the DVD to watch at home, but I like to go to these screenings because the discussion afterwards is always interesting. There are often people who have knowledge of relevant and local initiatives and organisations which can be of interest. It is also a good opportunity to meet like minded people. 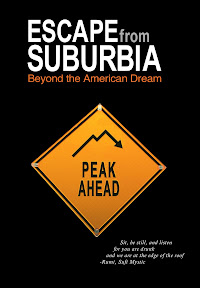 Escape from Suburbia looks at the alternatives. It shows how those who want to try extend the lifespan of the suburban model through alternative fuels such as biofuel and hydrogen are wasting their time. These options are not cheap enough. The only alternative is to change the model to a localised model. In a localised model, people do not have to travel to other areas for any reason. They work and shop locally, food is grown locally and people socialise locally. Hospitals and schools support the local area, etc.

This reminded me of another documentary called The Power of Community: How Cuba survived Peak Oil. Their solution to the cuban oil crisis was also to make everything localised instead of centralised, reducing the need for transport. They also moved to organic and sustainable farming methods because fertilizers are oil based. These two changes came with many benefits to health and community. You can read more about it in my review of the documentary.

I think we will move away from the suburban model toward a localised model and we will benefit from it. However, I think that it will only happen under duress. Just like in Cuba they had no choice, we will only make the change when we have no choice.

Escape from Suburbia is not the best documentary I have seen on this topic, but it did have some interesting points. That combined with the discussion after the screening, makes it worth the effort. There is another screening tonight and tomorrow night, details here.