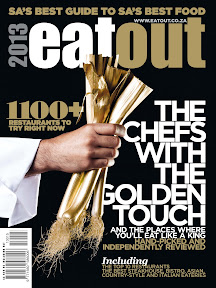 I was honoured once again to be invited to the annual Eat Out DSTV Food Network Awards ceremony where they announce the Top 10 restaurants along with a few other awards. Held at the Westin Cape Town and attended by 360 people, it was a glamorous event. The who’s who of food were all there, including most of Cape Town’s top chefs and restaurateurs (a good tip is to never go to a top restaurant on Eat Out awards night as all the chefs are at the awards!).

The food at the event was excellent and prepared by some of our top chefs. We had very fancy canapés created by Grant Cullingworth, exec chef at the Westin Cape Town, and those were accompanied by lovely Boschendal bubbly. First course was prepared by Marthinus Ferreira of DW Eleven-13, nori-wrapped springbok tataki, mushroom soil, beetroot gel, parmesan spheres, soy-sake reduction, pickled mushrooms and radish springbok tartare. 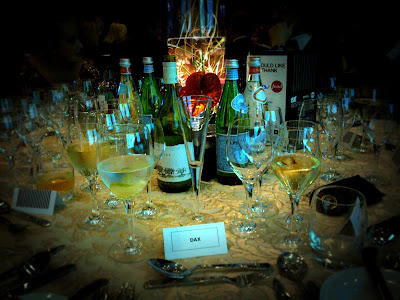 Second course was by Scot Kirton of La Colombe, Umami broth, samphire, seaweed, miso scallop, langoustine, abalone, soy caviar and sea fog. You may be wondering what sea fog is. they placed a box containing seaweed and stones on the table, inside was dry ice. When they served the dish they poured water into the box and it steamed a fog scented by the seaweed all over the table. It was quite fantastical and spoke to the current trend of multi-sensory food experiences. 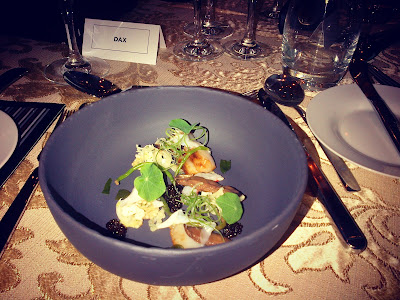 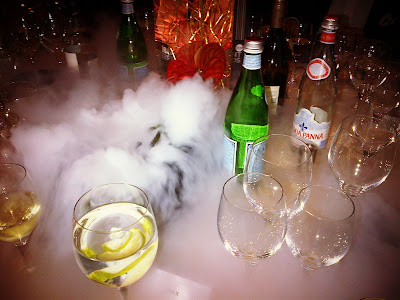 The 3rd course was prepared by Bertus Basson of Overture. Home smoked pork belly, Camilla’s potato pie (that’s Camilla of Table at De Meye), organic beetroot and asparagus with truffle butter. I think it may have been the best pork belly I have ever had. This course was not plated but served on platters for sharing, another current food trend.

The dessert was prepared by Vicky Gurovich of Mount Nelson. It was looked and tasted incredibly as well as being technically masterful. I’ll let the pics speak for themselves. 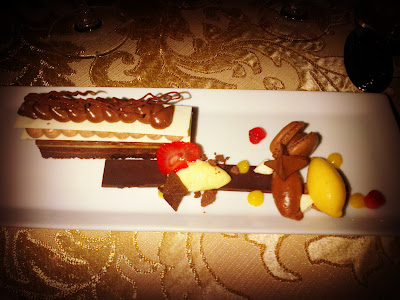 Rob van Vuuren was the MC and had the crowd in stitches with his over the top comedy routine. Once the crowd was warmed up and well fed, Abigail presented the category awards:

I was surprised at the Best Asian award. I haven’t eaten at Saigon for quite some time (apparently they have been open for 15 years), but I would expect most people would select Kitima for best Asian. I’ll have to visit Saigon and see what’s going on there.

Then followed the Top 10 awards:

When each winning restaurant was announced, they showed a short video on the restaurant. They videos were pretty cool, worth checking out on Youtube.

Chef of the year went to Margot Janse of The Tasting Room and Restaurant of the year to The Test Kitchen. Service Excellence Award went to Rust en Vrede. 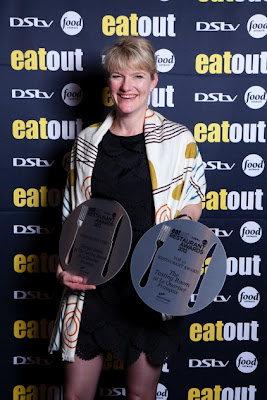 There were 20 restaurants nominated for the Top 10 and those that did not get selected would have missed the mark by mere point or two so I think it’s only fair to list the balance of the top 20 because you will want to visit these too:

Neil Grant of Burrata suggested there be an award for wine service next year and I wholeheartedly agree. Wine service is an element of service which we need to recognise and reward.

Grab a copy of the latest Eat Out magazine to see more info on the winners and reviews of over a thousand restaurants around the country (including a bunch of Cape Town and Stellenbosch reviews done by me).

Check out the Eat Out website for up to date restaurant news and reviews.