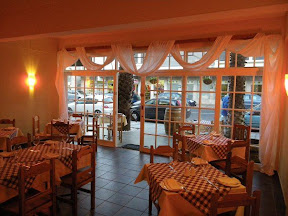 I feel like I should visit this restaurant again before I review it, but I don’t know when I’ll get another chance to visit so this review will have to do for now.

It wasn’t a great first experience. We felt like pizza and decided that instead of going to Primi up the road, we should support the small, local Italian restaurant instead. I was looking forward to it, because it really is just around the corner from my place and I thought it could be a nice local for me (walking distance local that is, my driving distance local has to be La Boheme). I had also heard some rumours that it was good.

So we arrived and found ourselves a table outside, verging on the pavement. I can tell you some very strange and dodgy people walk along Seapoint Main road at night. The waiter couldn’t really understand what we were saying when we tried to order drinks. Having Italian waiters gives the place an authentic Italian feel, but is irritating when you can’t communicate with them.

Anyway, with some gestures, slow enunciation and threats we managed to organise a coke and a bottle of water. Then someone who appeared to be the owner or manager came over to introduce the menu. He mentioned the delicious thin base pizzas (my favourite kind) and we were excited because that was what we were there for. So we ordered two pizzas from another waiter who was struggling until we just pointed to the menu items and then everything went smoothly.

Well, when I say smoothly I mean terribly. The waiter returned two minutes later to tell us they could not offer us pizzas as they had run out of dough. It was not yet 9:30pm on a Saturday night, how does an Italian restaurant run out of pizza dough? The place was quite full but certainly not jam packed. So what do we do now? We feel like pizza and there is a Primi a stone’s throw up the road but we’ve already half drunk our beverages. So we grudgingly decided to stay and try one of the home made pastas. My dining partner had the bolognaise (R45) and I had one with anchovies, chilli and olives (R60). The pastas are definitely home made, the texture is completely different. They were quite tasty.

We then had a coffee (R14) and left. Despite an experience of many shortcomings, we will probably go back, for two reasons: Firstly, it is very reasonably priced. Pizzas ranged from R38 to R60 and pastas from R45 to R60. The short wine list (about 10 each of white and red) had some inexpensive options (around the R100 mark) as well as some pricier options.

The other reason we will go back is that we saw the pizzas other people ordered and they did look good. Apparently running out of pizza dough does not happen normally, so hopefully next time we will fare better.

In the mean time, I’ll cautiously recommend Casa Nostra as a casual, inexpensive local (if you live in Seapoint) option.