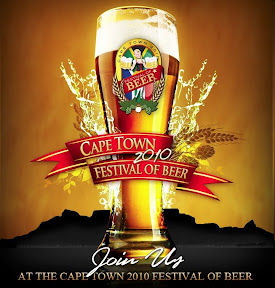 A couple of months ago we had the Craft Beer Festival at the Biscuit Mill, then we had the Oktoberfest at Paulaner and now we have the Cape Town Festival of Beer. One might think it’s beer overload but each of these events are well worth attending as they are quite different. While the craft beer festival was well attended, it was quite small and focused on craft beer or microbreweries. The Oktoberfest is well known and involves a lot of beer and singing along to German music. The Cape Town Festival of Beer is a showcase for all types of beer.

The microbrewers are strongly represented with representation from Camelthorn, Napier Beer, Boston Brewery, Darling Slow Brew and more. Paulaner is there and SAB is there. In fact SAB is sponsoring the whole thing. The festival is happening at Hamilton’s rugby club in Greenpoint, with several marquees erected on the rugby fields. The marquees are set up in a horseshoe shape with the breweries down the one side and the other side is a big bar with a stage for the live acts, at the end are the food stands. Basically it’s set up to be a big jol.

I’d recommend trying the various beers first, luckily they do tasters so you don’t have to buy a pint just to try it. Chat to the microbrewers, they are passionate and knowledgeable. When you’ve done that, get yourself a pint and get partying! There are all sorts of other things happening like a potjie competition and what not. Also, there is a raffle to wine beer for a year…

My tip is to check out the Newlands stout which was brewed by one of the SAB master brewers just for the festival. It’s unpasteurised and unfiltered and it’s fantastic. I will see you there later!

Doors open midday today and tomorrow and the festival closes at 11pm. There is a strong taxi presence so be responsible and don’t take your car.