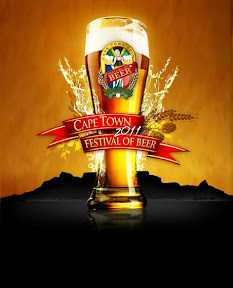 This is the second year for the Cape Town Festival of Beer and it’s definitely bigger and better than last year. For those who love craft beer, this is the festival for you. With over 100 beers represented and 30 or so breweries it’s the perfect opportunity to be introduced to different beers.  There is plenty of space and the noise level is not too high so one can actually have a decent conversation with the brewers while trying the beers.

The setup was slightly different from last year. The tents were still erected in a horseshoe shape, but the live entertainment stage was in the middle while food and beer stands were interspersed along the two sides. One side was completely protected with glass sides, so there was a place to escape the wind when it got a bit crazy.

There was a bunch of new beers and breweries this year. Many of the breweries you would have heard of like Darling Brew, Jack Black, etc, were showing off new beers. In addition there were new breweries that I had never heard of, like Devil’s Peak, Triggerfish, Gallows Hill, Saggy Stone, etc. There were some superb beers, some interesting beers and some pretty gross beers. But variety is what craft beer is all about. SAB (which is one of the festival sponsors) had also brewed up 2 craft beers for the festival. I didn’t really like either of them if I must be honest. I preferred some of their previous efforts.

There was an abundance of food. From the standard fare of pizzas and burgers to more interesting options like German sausages from Raith and fish tacos from San Julian. There was also wine available for the non beer drinkers.

I was trying to think what could make the festival better and I couldn’t really come up with much. There was plenty of parking, plenty of seating, plenty of toilets (although they were not as nice as the ones at the other beer festival), plenty of activities and entertainment and at R60 entrance it wasn’t expensive. In fact, it was so good I went on Friday night and again on Saturday.

Apart from better toilets and maybe some cool bands like Them Tornados, I’d be happy if next year’s festival is exactly the same.