A common question I get asked is “Where can I have the best steak in Cape Town?” or “Where did you have the best steak ever?”. Surprisingly, these are not easy questions to answer. The best steak I’ve ever had was at a restaurant that has closed down and the chef now works overseas, so that won’t help you. I’ve tried many of the perennials like Nelson’s Eye (gross), Wooden Shoe (not great at all), Hussar (now that it’s a chain, rather inconsistent). I’ve also tried the new kids on the block (because old grimy steakhouses are ancient history) like HQ (limited selection) and Carne (not bad). I even ate at the newest contender, Knife (average) recently. But I’ve never really found a place that I would say is undoubtedly the king of steak in Cape Town.

1800° is keen to wear the crown, but I’m afraid it doesn’t make that much of an impression either. I parked in the underground parking which you can do if you’re eating at the restaurant. That’s a good think because I’m not sure where you would park otherwise. Although, this became a problem when I couldn’t get out of the parking again, but more on that later.

I was hoping to have a tour of the hotel (seeing as I was expected) but I ran late and had to skip that. So I had five minutes to have a drink at the bar and look around. The restaurant is actually very nice looking and it doesn’t really feel like a hotel restaurant, probably because it is so small. When my dining partner arrived, we were seated at a table for two in the centre of the restaurant. The two seater tables are in two rows in the centre of the restaurant and are separated by a divider which completely lets through the sound. We were seated next to another couple and their conversation was so clear, I thought they were talking to me. Not ideal, so I had us moved to another table. Luckily the restaurant was not full, otherwise it would have been a big problem.

Many of the serving staff are from the Roundhouse, so the quality of service is really good. For starters I had the pan fried chicken livers (R49) on tomato and basil crostini. The livers were nicely cooked, not over cooked which is a common problem. The dish was tasty, not amazing. My partner ordered the char grilled asparagus (R55) with white bean puree, crisp pancetta and wild rocket. We both agreed that the dish didn’t really work. It looked good on the plate and the ingredients were fresh, but they just didn’t combine very well.

For mains we decided to go with steak seeing as this is their thing. The 1800 name is derived from their special grill which can cook at this very high temperature. It’s fahrenheit and converts to about 982° celcius, that’s hot!

It might be a little too hot because both our steaks were done beyond our specification. I had a 200g fillet (R120) with an Italian mushroom sauce. My partner had the chateaubriand (R149) with the Madagascan peppercorn sauce. The steaks were good, but not good enough to stand out from the crowd. We found them a little less tender than we might like. The sauce was too rich, both of them had the same sweet creaminess but the flavours were enjoyable. On the side we had mash, steamed veggies and fine green beans (R26 – you only get one side with your steak so the additional side would have been charged). The sides were awesome. One thing I’m tired of is butternut and creamed spinach which has become a steakhouse staple. The mash was quality and the steamed veggies were beautiful, fresh and not over cooked. I may have left some meat on my plate but I ate all of those veggies.

The menu consists of more than just steak. It also offers interesting dishes like wok fried quail (R122) and braised shin of veal (R95). Ravioli of artichoke (R89) is the only vegetarian option. There are a few seafood options though, char grilled loin of tuna (R115), smoked Franschhoek trout (R98) and bouillabaisse (R95). I should have tried the bouillabaisse, I’d like to compare it to the awesome one I had at Sinn’s the other day. 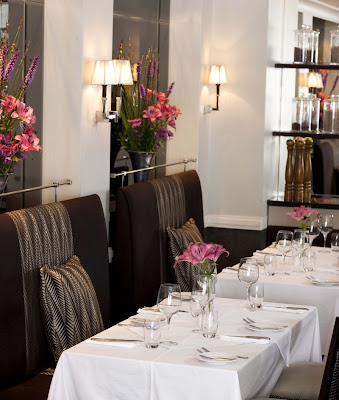 The desserts were terribly disappointing. They bring a platter with all the desserts so you can see what they look like, but none of them looked that appealing. We tried the two chocolate options and they were certainly not worth getting fat for.

Before we left I popped into the bathrooms and was very impressed. Not only clean, but also beautifully decorated with interesting basins (kind of vintage hospital basins) and great hand soap (I hate that pink cheap stuff). So now you’re wondering about the parking story. Well, for some reason nobody responded to the buzzer in the garage so I was stuck there until I got out the car and ran off to find someone to assist.

Overall, my experience at 1800° was average. I like the place and wouldn’t complain if someone took me there for dinner but it probably won’t be front of mind when I’m thinking of a place to go.